The Metaverse: 5 Reasons It Will Be Worth Trillions 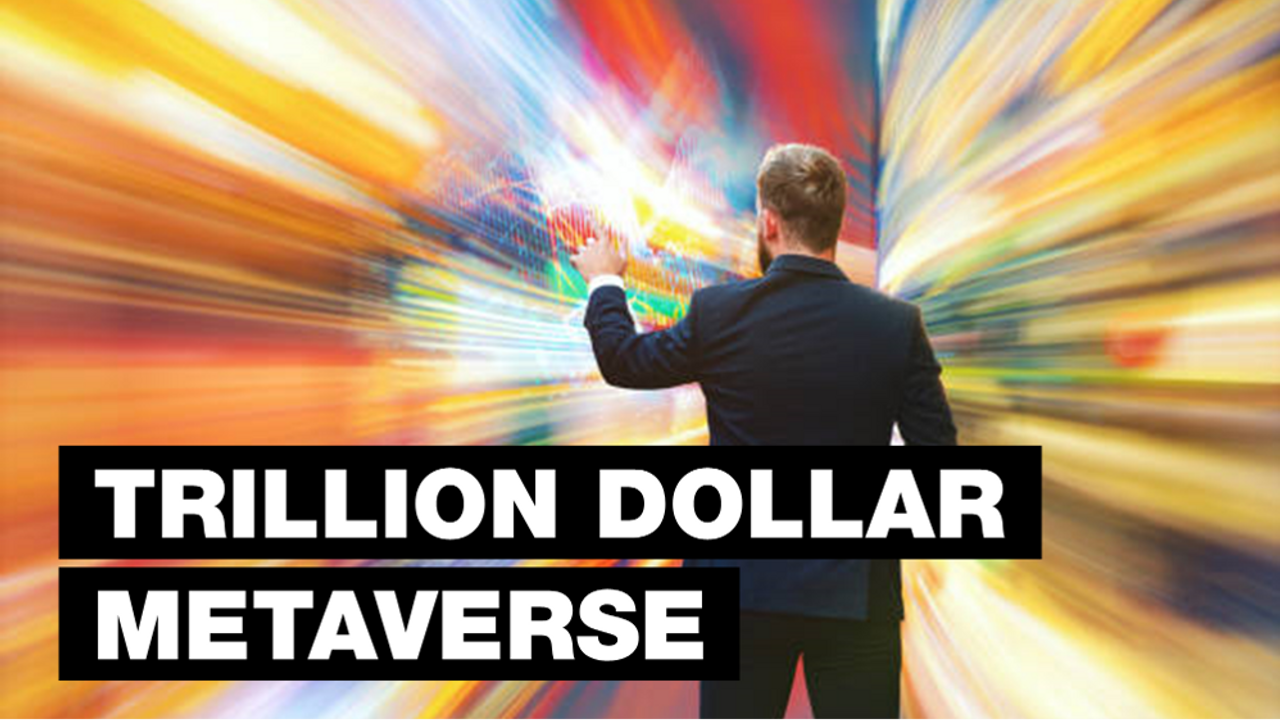 The Metaverse is the convergence of physical, augmented, and virtual reality in a shared online space. And it could become integrated with our everyday lives in approximately 10 to 15 years once technologies like virtual reality and augmented reality mature and become commonly used by the mainstream public.

The Metaverse will end up being a multi-trillion dollar industry that impacts every part of the global economy. Here are 5 reasons why:

1. More Transactions Will Take Place In The Metaverse Than In The Real World

That’s partly because creators will make more items in the Metaverse than they do in the real world. Those items will include digital houses, clothing, furniture, cars, and so on. Those items could be used for a variety of purposes such as simulating real environments for business purposes, creating animated films, and designing worlds for educational purposes. Over time, these virtual items and the virtual worlds they’re in will look increasingly more realistic. Marketplaces within the Metaverse could transact hundreds of billions of dollars per year once the Metaverse becomes mainstream and is fully integrated with our everyday lives.

NFTs will also play a major part in the overall Metaverse economy.  In a decentralized Metaverse, users can claim ownership over their digital assets. In this scenario, each person would have the option to own an asset such as an NFT and earn up to 80% of the revenues when that asset is resold throughout a blockchain.

For example, clothing designers can create clothing with materials that can’t exist in the real world and sell them as NFTs using cryptocurrencies. These same clothing items could be reused in CGI films, video games, and other forms of entertainment.

And Nike recently launched Nikeland on the Roblox platform so that gamers can style their avatars with Nike gear.

When it comes to virtual worlds, there could be as many as thousands or millions of virtual worlds in the Metaverse. And their total square miles could surpass the size of planet Earth within the next couple of decades.

According to Ark Invest, the revenue from virtual worlds could approach $400 Billion by 2025. And as virtual asset-building tools become easier to use for the average person, that number could multiply ten-fold over the coming decades.

The Metaverse is going to be an entire industry that will not be controlled by one company. Nevertheless, Mark Zuckerberg’s Meta could potentially comprise a huge number of transactions in the overall Metaverse industry.

2. The Metaverse Will Accelerate The Use Of NFTs And Digital Currencies In Video Games

Gaming is the most well-developed part of the pre-metaverse.

According to Statista, 3.2 billion people played video games in 2021.

Gaming also is the most lucrative entertainment industry by far. It makes more than triple the revenues of box office movies and 7 times more revenues than music.

Games like Fortnite, Roblox, and Minecraft are already considered pre-metaverses because gamers can use the same avatar and digital assets in a wide range of experiences. Even Grand Theft Auto Online could be considered a pre-metaverse.

Games like this will likely take advantage of virtual reality technology more and more as VR adoption rates rise. According to ARK Invest, VR headsets could reach smartphone adoption rates by as early as 2030.

The adoption of NFTs and cryptocurrencies for large game franchises is a strong possibility as well. NFT sales hit $10 billion in the third quarter of 2021. This number is expected to grow exponentially over the next couple of years.

Axie Infinity is a platform that allows users to build a collection of digital assets and use them across an expanding universe of games. It has its own Ethereum-linked sidechain called Ronin, its own crypto wallet, and its own marketplace for buying and selling Axie characters as NFTs. We may see large, mainstream game studios adopting a similar business model.

In the future, we may also begin seeing the ability to use digital assets, avatars, and even the real faces of players in multiple video games, regardless of the video game publisher. This development would further increase the numbers of transactions in Metaverse marketplaces.

3. The Metaverse Will Save Companies And Individuals Billions Of Dollars A Year

A high number of virtual worlds will be made by companies to simulate physical processes from the real world. This is an effective way to anticipate the feasibility of a project before any physical work occurs.

Nvidia offers a digital twins feature under its omniverse offering to address this use case.

Erikson, a telecommunications company, is using Nvidia’s omniverse to build a digital twin of an entire city to continuously optimize the performance of their fleet of 5G antennas and radios. More specifically, they’re determining how to place and configure each of their transmission sites for the best coverage and network performance.

BMW is building a factory in a digital environment to simulate real-life production scenarios. This will ultimately speed output, increase agility, and optimize efficiency. BMW is also using Nvidia’s omniverse to teach its robots new skills.

Siemens Energy is using Nvidia’s omniverse to build a digital twin of one its steam generator facilities to predict corrosion and ultimately reduce downtime. This approach alone could save 1.7 billion dollars a year in the energy industry.

And many car manufacturers like Tesla, train the AI for self-driving vehicles in virtual environments so that the AI can handle a high range of unusual situations in the real world. Over time, these virtual environments will become increasingly more complex and include a wide range of driving and pedestrian scenarios.

"Virtual offices" is another approach that could save white-collar workers countless hours per year and enhance their output. In the real world, we can only have anywhere from 1 to 4 computer monitors in front of us at a time. We can have multiple windows open in each of those monitors and multiple tabs open in each internet browser. However, we can only view a small number of those screens at a time.

In a virtual 3d office, we could have 30 or more screens visible in front of us at a time. In one giant view, we could see information such as news articles, open documents, stock prices, company analytics, social network posts, and so on. And in a virtual office, we could perform certain work activities in ways that weren’t possible before. For example. If we need to analyze data, we could view that data as 3-dimensional structures instead of just charts and tables on a 2d screen.

The Metaverse could allow software from various companies to connect with others in ways that weren’t possible before.

For example, Nvidia’s Omniverse will allow design products made using Adobe software to connect to Autodesk software in one collaborative environment.

Current Offerings Will Be Tailored To The Metaverse

Existing tools used for productivity will likely be tailored to the Metaverse as well.

And when neural interfaces in the form of headbands and wristbands become usable, they would greatly streamline important activities in the Metaverse as well.

The next step of evolution for social media networks is likely Metaverse environments that require virtual reality headsets. There could be thousands or perhaps millions of worlds that connect people based on shared interests and goals.

VRChat is an example of an existing platform for virtual communities that requires virtual reality headsets. It currently has over 25,000 community-created worlds.

We may see existing social networks like Twitter and LinkedIn gradually offer their own versions of Metaverse communities. Even YouTube could begin implementing Metaverse-like features in the coming years to avoid being disrupted by competitors.

Like with all traditional social media networks, ad revenues will become a main source of income for Metaverse worlds intended for socialization. According to Statista, social media ad revenues are projected to total $51 billion in 2021. And those numbers are growing rapidly year after year.

There’s a strong possibility that Meta could become a dominant force in this area. Although Facebook is the most scrutinized social media network right now, Facebook, Instagram, and WhatsApp have the most active users by far out of all traditional social media platforms. Facebook alone had 2.9 billion active users in October 2021. And according to Search Engine Journal, 1.8 billion people use Facebook groups every month.

Meta also has hardware dominance in the virtual reality space because of its VR  devices. And Meta may prove to be a strong competitor in the augmented reality and wrist-based neural interface space as well.

5. The Metaverse Will Disrupt The Global Education System

The Metaverse could allow students to teleport to a wide variety of 3d representations of historical events and places. It can also allow students to experience close-up processes in biology, cosmology, and other fields.

These kinds of interactive features would allow teachers for all topics to show perspectives of their subject matter in ways that were unthinkable in past decades and centuries. Even educational YouTube channels could take advantage of this amazing technology.

And there could be no limit to the number of students that each teacher could have using the Metaverse and other related technologies such as Web 3.0 and blockchain. Some people would even say that this could lead to a world where the top 10% of the world’s teachers could teach 90% of the world’s kids and make millions of dollars.