Mars in 2050: 10 Future Technologies In The First Mars City 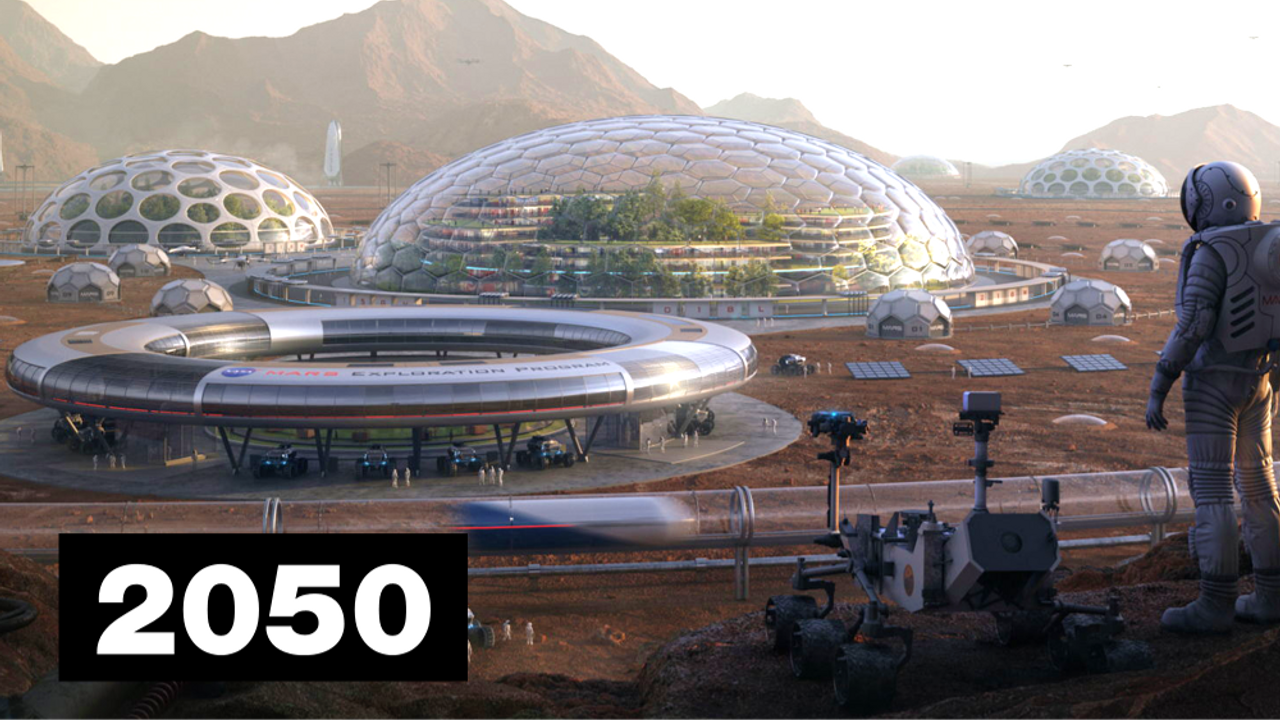 1. People On Mars Could Be Assisted By Hundreds Of Robots

In 2050, there could be hundreds or perhaps even thousands of people in the first city on Mars. And thousands more could be transported to Mars every two years.

This Mars city will likely start off with a team of scientists, researchers, and robotics engineers. But by 2050, people with jobs in construction, maintenance, manufacturing, and food preparation will likely become commonplace.

By this point, there wouldn’t be much time for recreational activities. That’s because most of these civilians will likely work 10 to 16 hours a day to build and develop the Mars city as quickly as possible.

Hundreds of robots would be deployed to Mars to assist with construction efforts. The most advanced robots with varying levels of general intelligence would assist with household chores, food preparation, and more.

And 3d bioprinters could be available to print skin and organs to help mitigate premature deaths.

2. Hundreds Of 3D-Printed Facilities Could Be Built

The Mars city would be comprised of multiple facilities that complement each other such as living quarters, restaurants, storage areas, communication hubs, gyms, and research centers.

Many of these facilities could be funded by investors on Earth that could have partial ownership of them.

Because of the high radiation on Mars, humans would typically reside in enclosed domes above the surface and tunnels below the ground.

Adequate air pressure would be constantly maintained in these habitats to make up for the low air pressure outside. Outside of the facilities, artificial trees and specialized turbines could convert carbon dioxide into oxygen for the humans inside.

In order to create building materials, Martian soil would be excavated from the ground and mixed with water-ice to create a material similar to concrete. Autonomous robots would then use this material to 3d print structures layer by layer.

Because the surface gravity of Mars is only 38% as strong as Earth’s gravity, gyms would be highly recommended to civilians so that they can maintain muscle density, bone density, and cardiovascular health.

Radiation-absorbing materials based on nanotechnology could be used in spacesuits and the exteriors of vehicles to mitigate the effects of radiation on humans. These same materials could block particles of dust, to provide long-term protection against the environment outside.

3. Most Food On Mars Will Be Genetically-Engineered

A high percentage of food would be comprised of crops grown in tunnels, lab-grown meat, and insects. When it comes to vegetables, a typical Martian diet would include genetically engineered wheat, corn, soybeans, peanuts, and sweet potatoes, which would be grown on the red planet. Other common food items would include lab-grown chicken, cultured meat burgers, pizza, vegan eggs, and vegan milk. Cricket flour could be incorporated and hidden in many different recipes as well because of its high protein and its healthy omega-fat ratios. All of these food items have reasonably high-calorie densities to ensure that a large Mars colony would stay fed.

A small percentage of food that people are more familiar with would also be supplied from Earth in cargo shipments. However, those shipments of food will become less frequent over time as the Mars colony becomes more self-sufficient.

Some projections indicate that Mars should become fully self-sufficient somewhere between 2120 and 2150.

Much of the energy that the Mars city relies on will come from solar panels on the Mars surface. These solar panels could also be supplemented with nuclear-fission reactors.

Large energy storage facilities will be utilized to provide backup power in response to global dust storms that can last for weeks at a time and block sunlight to solar panels.

A nuclear fusion powerplant could begin to be constructed to handle a majority of energy needs.

Autonomous robots could also extract hydrogen from water to create hydrogen-based fuel for vehicles. These vehicles would enable scientists to roam for hundreds of miles on the Mars surface.

5. Terraforming Plans Will Be Underway

Mars has numerous aspects that make it uninhabitable for life. Namely:

For those reasons, terraforming is a necessary solution if humans plan to inhabit Mars in the long run.

Terraforming efforts could physically begin as early as 2100 after the main hurdles of reaching self-sufficiency have been surpassed.

This entire process could take as long as 500 years.

Over time, the first city on mars will grow much larger, and eventually, multiple cities will be spread out on Mar’s surface.

A majority of the cities could be built in the Hellas Planitia region, which is the lowest lying plain on Mars. It has an air pressure that is more accommodating to human life than anywhere else on Mars.

We could also have multiple human settlements near the natural caves and lava tubes close to the volcano, Arsia Mons.

Dozens of exploration robots could be deployed to gather data about these areas.

Further in the future, an underground hyperloop system could be constructed to transport civilians between the cities.

7. Mars Will Become A Major Hub For The Space Mining Industry

Mars colonization will be profitable because of the sales of intellectual property rights to Earth, the mining of valuable metals on Mars, and the ongoing mining of asteroids in the asteroid belt between Mars and Jupiter. Space mining in particular can make corporations trillions of dollars over the next several decades.

After mining from asteroids and Mars itself, that material could be sent back to Earth on reusable rockets.

Mars is about 140 million miles away from Earth on average. And it typically takes around 20 minutes to send a signal from Mars to Earth and vice versa. However, when the Sun is directly between Mars and Earth, communications can be blocked for up to two weeks.

That’s why satellites will be positioned in Mar’s orbit around the Sun to act as relay stations. These satellites will allow for continuous communications between the two planets without substantial interruptions.

Data transfers between Earth and Mars could be primarily conducted using blockchain technology. Some of the most fascinating communications could include viral videos about what it’s like to live on Mars.

9. Re-Usable Rockets Will Transport People To Mars Every 2 Years

Most of the civilians on Mars will likely travel to Mars on SpaceX spacecraft—more specifically, its fully-reusable Starship model and its subsequent upgraded versions. Other people will travel on spacecraft supplied by NASA and other organizations.

Before people embark on their trips to Mars, they will likely undergo extensive psychological screenings and background checks to ensure that they’re mentally prepared to endure the tough conditions on Mars for up to several years. They might also spend hours in photo-realistic virtual reality environments that contain representations of the living quarters and work facilities on Mars. This would ensure that people have a firm grasp of their day-to-day living conditions before traveling to Mars.

Additionally, they could spend vast amounts of time in VR environments representing the interior of spacecraft. This is critical because a trip to Mars takes 7 months and it involves being in a relatively compact space occupied by up to one hundred people.

It’s expected to cost $200k to $300k to move to Mars—about the same as the cost of a house in the United States. In fact, some people could sell their houses in order to move to Mars while others could pay for this trip using personal loans. Each person would pay off their loan by getting a job to help fill the labor shortage in the Mars city.

Thankfully, the return ticket from Mars back to Earth is expected to be free.

10. Autonomous Robots Will Mine For Water

The water supplied to Mars’ residents will be mined for and created by autonomous mining robots. Those robots will obtain that water from ice and hydrated minerals.

Significant innovations in autonomous robotic mining systems will be required before even the first human sets foot on Mars.

The majority of the water will be recycled using nanotechnology-based filtration systems.