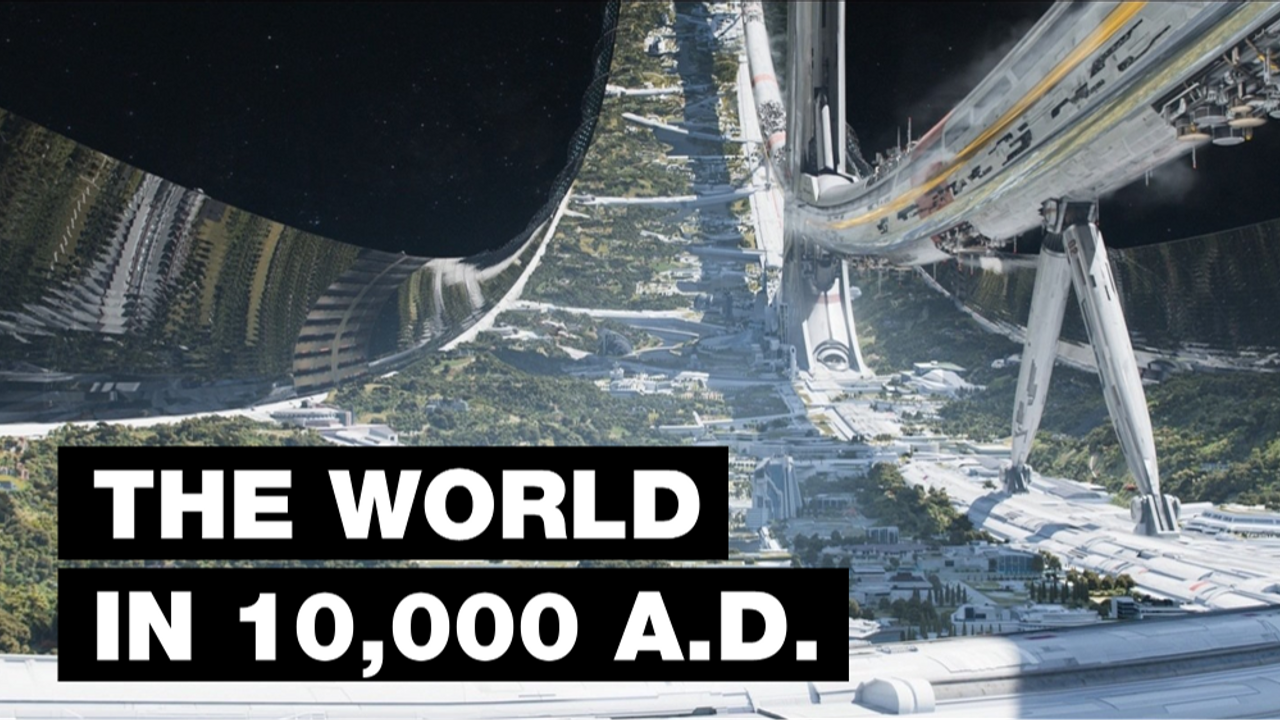 In the year 10,000 A.D., humanity has reached an incredible level of technological advancement. For example:

1. 30% Of The Milky Way Has Been Inhabited By Humans

At this point, humans have inhabited almost a million solar systems.

Humans who venture outward throughout the galaxy typically use advanced synthetic bodies to endure these extremely long trips. The spaceships that they use are typically controlled by fully conscious artificial intelligences or the uploaded minds of enhanced humans. Each ship contains thousands of fertilized human eggs to populate planets, moons, and asteroids that are able to support life. Fertilized eggs for other species and seeds for plant life are also included in these ships to aid with developing ecosystems as needed.

To meet growing population needs, flat metal structures with cities on top of them now orbit a small number of planets. Advanced versions of nanotechnology and genetic engineering of food are able to keep these cities largely self-sustaining. These ring cities contain sections that differ from each other culturally based on how far away they are from each other.

These cities also double as processing and distribution centers for spacecraft and other space equipment.

3. Many Alien Species Have Been Discovered

By now, a high number of semi-intelligent alien species have been found. Furthermore, ancient ruins have been discovered on some worlds, which indicate that advanced civilizations once existed but somehow failed or destroyed themselves a long time ago. Millions of other planets have been discovered to have thriving ecosystems that support animals, plants, and other life. Many of the organisms being documented are small and insect-like in appearance. However, a small percentage of these organisms are more intelligent than higher mammals such as dolphins, monkeys, and cats. Organisms that resemble the Octopus species have been found to exhibit impressive levels of intelligent behavior as well.

4. Humans Are Living For Thousands Of Years

By the year 10,000 A.D., many humans have been alive for thousands of years. The majority of these humans are either living in massive, hyper realistic-simulations or they’re using synthetic bodies in the physical world.

Because they’ve lived so long beyond their biological bodies, many of their personalities and values no longer resemble that of their former selves in any observable manner.

5. The Milky Way Galaxy Is Being Infused With Intelligence

For thousands of years, self-replicating probes have been sent to moons in millions of solar systems. Their purpose is to scan solar systems throughout the Milky Way and send useful information back to Earth and other planets indefinitely.

These probes are sent to moons because the environments of moons are typically more stable than planets. They usually have no atmosphere, no wind, and no water. And they’re easy to enter and leave because of their low gravity. Each probe is powered by solar energy.

Each probe also contains a compartment of an advanced version of computronium, which is a form of programmable matter. This matter is comprised of intelligent, self-replicating nanobots that are capable of converting regular matter into more copies of itself. As a result, humans now have an unimaginable large network of small computers that can communicate with each other and share data.

Each gram of this material is trillions upon trillions of times more powerful than all biological human brains combined in the early 2000s.

After landing on Moons, each probe creates a factory using lunar material and manufactures a thousand copies of itself. Each probe in the second generation is then sent to more moons.

If each of those probes in the second generation creates a thousand more probes, there would be a total of a million probes, then a billion, then a trillion, and so forth.

The biological and technological descendants of humanity are attaining the perfection of computer science. After thousands of years of theoretical and practical testing, all of the knowledge required for every permutation of hardware and software is now available. New applications can be instantly created in real-time and with zero errors. From this point forward, the vast majority of traditional computer science as we know it will be considered obsolete as a field of study.

7. The Grand Unification Theory Has Been Proven

The Grand Unification Theory is a model in particle physics in which, at high energies, the electromagnetic, weak, and strong forces are merged into a single force. For many years, many people believed that these forces were merged together in the brief period of time before the Big Bang occurred.

By 5,000 A.D., a particle accelerator covering the entire perimeter of our Solar System had been built. It became the single largest science experiment in history. It was powerful enough to accelerate particles to a state known as Grand Unification Energy, allowing the very earliest moments of the Universe to be simulated. The electromagnetic, weak, and strong nuclear forces were viewed for the first time at precisely the same strength and effectively became different aspects of a single force. In this experiment, quarks and electrons became the same as well and achieved another form of unification.

These developments could lead to a greater understanding of the Theory of Everything, which is a hypothetical framework explaining all known physical phenomena in the universe.