The World in 2080: Top 7 Future Technologies 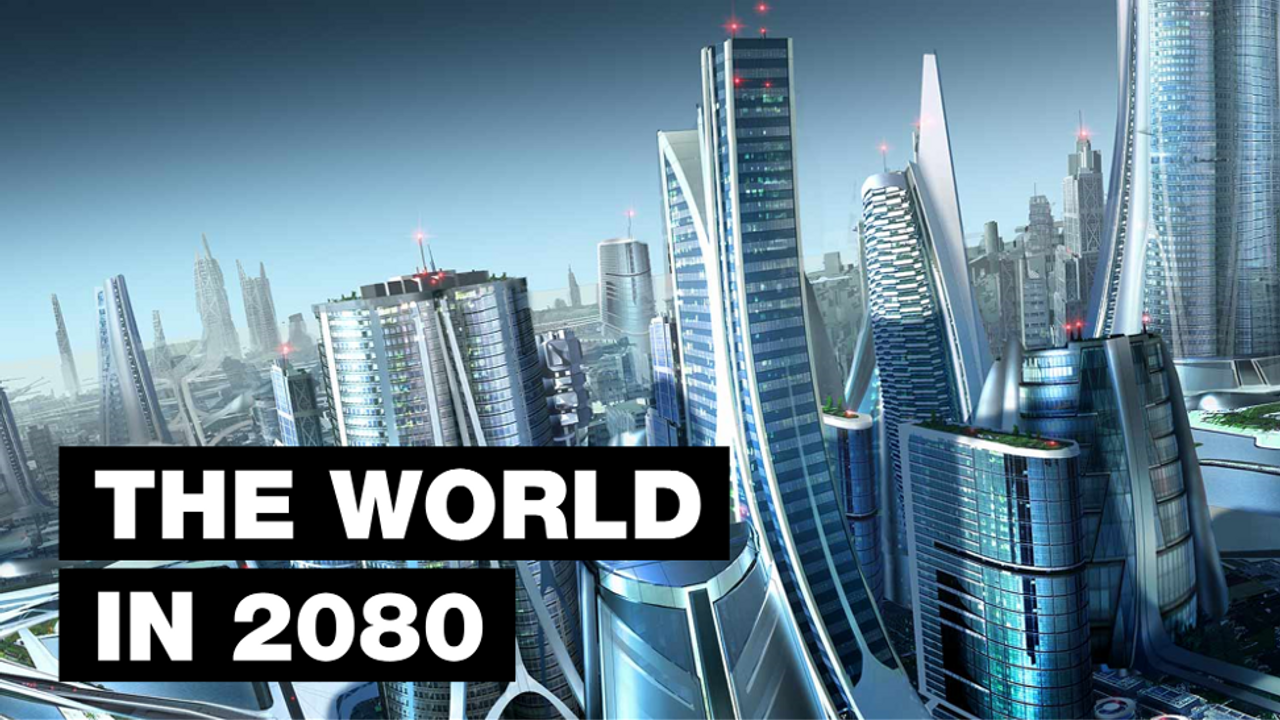 In 2080, significant technological advancements are changing the world forever. For example:

For the first time in history, some humans are becoming more robotic than biological. The average person now has access to a wide variety of biotechnology implants and personal medical devices. These include fully artificial organs that never fail, bionic eyes and ears that provide Superman-like senses, nanoscale brain interfaces to augment a user’s intelligence, synthetic blood, and bodily fluids that can filter deadly toxins and provide hours' worth of oxygen in a single breath.

The most adventurous among us are volunteering to have their arms and legs amputated to gain prosthetic arms and legs that boost their strength and endurance by orders of magnitude. There is even artificial skin based on nanotechnology, which can be used to give the appearance of natural skin when applied to metallic limbs.

If a fully upgraded person of the 2080s were to travel 100 years in the past, they would be superior to everyone else in almost every way imaginable.

Even developing countries have access to some of these available upgrades due to exponential decreases in price.

In 2080, complete wardrobes are no longer necessary. One nanotech suit performs the function of many and can transform into an endless variety of styles and shapes.

Even though they’re mostly restricted to specialized personnel, military special forces, and government elites, a number of nanotech suits are finding their way to the mainstream public.

Today, a high-end home closet may consist of a thin compartment built into a wall or floor. This compartment would contain nanobots and molecular building materials. A user can stand on or touch this compartment and issue instructions on what to create using voice commands or thoughts. Each nanobot is then programmed with the final clothing design and set into motion. Nanobots then take shape around a person’s body into a wearable outfit. This whole process is completed in a matter of seconds.

Depending on the outfit's function, it could contain carbon nanotubes, programmable matter,  metamaterials, claytronics, or any number of other useful materials.

When it comes to functionality:

The power needed for these various functions is supplied by nanowires embedded throughout the clothing material that capture solar energy and generate electricity from footsteps.

3. Most Of The Solar System Is Being Explored

Space elevators and space hotels are affordable for most people in the middle-class bracket. But for people in the upper brackets, trips around the Moon are now available.

For the more adventurous types, expensive guided excursions on the lunar surface are now available as well. Among the most popular tour destinations are the Apollo landing sites, which have been surrounded by perimeter fencing.

Mars now has multiple permanent bases on its surface. By 2080, the population, infrastructure, and self-sufficiency elements have all grown to such an extent that Mars will soon be ready to declare independence. There’s a steady influx of regular civilians that are eager to leave Earth and begin a new life on the Red Planet.

Furthermore, asteroid mining is still a growing industry and it’s one of the main reasons why there are more than ten trillionaires in the world. Mining operations primarily take place in the asteroid belt between Mars and Jupiter. But, these operations also extend as far as the large group of asteroids that share Jupiter’s orbital path around the Sun. The operations are almost entirely automated and overseen by powerful artificial intelligences. Throughout the inner solar system between Earth and Jupiter, a network of refueling stations now provide a ready source of propellant. This propellant is made by separating water into hydrogen and oxygen.

With much of the inner Solar System now home to a thriving economy, attention has turned to the untapped potential of the gas giants. For government and commercial interests, the most promising candidate by far is Saturn's largest moon, Titan.

Since anti-matter-powered spacecraft only take 5 months to travel to Saturn, its largest moon Titan already has its first human settlements. Currently, the population of Titan is restricted to scientists and other government and corporate personnel. But like the Moon and Mars, it will eventually grow to include regular civilians who are willing to start a new life that is hundreds of millions of miles away from Earth.

During the 2100s, it will become a major hub for science, research, commerce, and tourism in the outer Solar System.

4. Viruses Are Being Simulated At The Quantum Level

Thanks to advances in lattice quantum chromodynamics, the vast majority of viruses have now been accurately modeled and simulated down to the quantum level. This provides what is essentially a complete picture of these tiny organisms, which average 20-300 nanometers in size. This complete understanding of viruses could pave the way to absolute immunity against those viruses.

As this area of science continues to advance, perfect simulations of larger organisms and objects will become possible, which will provide new insights into the nature of matter.

For example, when we can perfectly simulate a human body, that will enable us to create synthetic human bodies with identical or improved functionality.

Technology on the scale of trillionths of a meter is becoming possible now. Picotechnology is orders of magnitude smaller than nanotechnology of earlier decades. Among other applications, it allows the structure and properties of individual atoms to be altered via the manipulation of energy states within electrons. This can produce metastable states with highly unusual properties. This will help humans create new and exotic forms of matter such as material that is harder and lighter-weight than carbon nanotubes. It will also allow humans to create perfect scans of human brains with sub-atomic detail.

With this information, we may be able to create synthetic brains that process information thousands or even millions of times faster than biological brains.

6. A Tunnel Connecting The United States And Europe Is Being Built

This tunnel is among the largest and most ambitious engineering projects ever undertaken. It’s being built with the help of advanced automation and robots controlled by powerful AIs. With hyperfast magnetic levitation up to 4,000 miles per hour, passengers using this tunnel can be delivered from the United States to Europe in under one hour.

Carbon nanotubes, along with powerful geo-sensing devices, have been paramount in the structure's design. Carbon nanotubes can also self-adjust in the event of undersea earthquakes. Also noteworthy is that the train cars operate in a complete vacuum. This eliminates air friction, allowing hypersonic speeds to be reached. The cost of this project is in the range of $88-175 billion.

7. Virtually All Of The World's Electricity Is Now Carbon-Free

By 2060, both coal and oil had been virtually eliminated from the global electricity supply. Practically every new building in the world utilized solar power in some way.

By the late 2070s, even the poorest nations achieved zero-carbon electricity.

After more than a century of research, solar cells are nearing their theoretical limit for efficiency. Nanotechnology has largely perfected their internal structures. The latest generation of solar panels are not only cheaper and more affordable than ever, they can also access a wider part of the electromagnetic spectrum—beyond visible light, into the infrared. Solar panels are also more sturdy and longer-lasting than ever and can be configured to alter their appearance and easily blend into existing buildings.

And, after achieving commercial viability in the 2040s, huge clusters of solar power satellites now orbit the Earth and provide 100% coverage to wherever electricity is needed.

Additionally, offshore wind turbine projects have continued to expand in recent decades and will soon be powerful enough to change the air currents of Earth.

Hydroelectricity, which involves generating electricity from flowing water, has declined in terms of its overall share of the world's electricity. However, it remains a significant source of power, helped by new developments in wave, tidal, and ocean thermal energy.

Meanwhile, nuclear fusion has moved from the laboratory into commercial uses in a number of countries, although it remains at a low percentage of global electricity for now. This is partly because of the high capital investment costs associated with it. However, it will likely have greater usage in the 2100s as the technology decreases in size and increasingly used for space-based applications.