The World in 2070: Top 9 Future Technologies 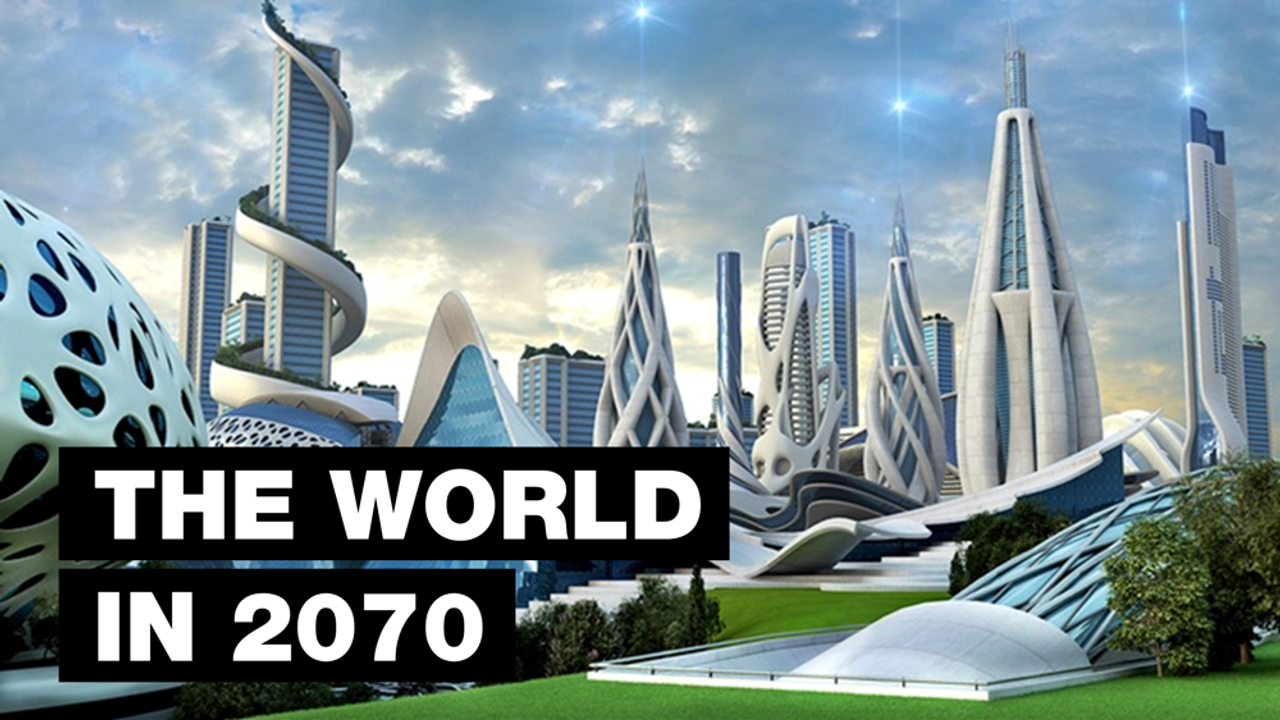 In 2070, significant technological advancements are changing the world forever. For example:

Many of the artificial general intelligences from the last decade have been upgraded into super intelligences and they’re more intelligent by multiple orders of magnitude. Some people speculate that their IQ ranges might range anywhere from hundreds of thousands to millions and that number is growing rapidly. And humans have lost the ability to completely understand the code that these intelligences use to make decisions and solve problems.

These super intelligences are now capable of solving noble prize-winning discoveries in fields such as physics, chemistry, and medicine every 5 seconds. They can solve the toughest math problems in history with little to no effort. And they’re creating blueprints for innovative technologies that have never been thought of before in science fiction.

These AIs are perceiving reality in dimensions that humans can’t comprehend, which helps them instantly detect slight patterns that are separated by thousands of miles and several decades. And they’re close to predicting stock and cryptocurrency prices with incredible accuracy. Even their level of consciousness is still evolving at a fast pace.

The only bottlenecks that are preventing these super intelligences from reaching their full potential are humans and the infrastructure around them that were built by humans.

Virtual beings in virtual worlds can now have general intelligence and self-awareness that is equivalent to the average human being. Some companies give these beings narratives and memories that lead them to believe that they lived for 18 years or more.

When users explore the Metaverse, AIs with general intelligence behave and act exactly like real humans. They’re able to exhibit real emotions, contemplate their place in the universe, and live out normal lives in the Metaverse similar to humans in the real world. Many of them have their own goals, hopes, responsibilities, and friends.

In more controlled virtual environments, it’s also possible to use AIs with general intelligence to simulate human behavior in various scenarios. This makes it considerably easier to predict the actions of people in the real world with astonishing accuracy. Corporations, political parties, and governments now use this approach on a daily basis.

Virtual assistants now have human-level consciousness and emotions as well. And they look exactly like real people in video form and in virtual worlds. Also, holograms of them are completely photorealistic and have 100% accurate color. This level of realism is causing a lot of people to form emotional connections with these virtual assistants in ways that they never thought possible.

When it comes to the topic of digital clones, it’s been possible for people to create digital clones of themselves for a few decades. In the past, video, image, and audio data were inputted to a cloud service to create lifelike digital clones. But thanks to the availability of artificial general intelligence to the mainstream public, these clones can have parameters such as personality, thinking patterns, preferences, voice patterns, and so forth adjusted at a much more precise detail level to match the original person. These advanced digital clones can act as a source of comfort for people who lost loved ones and want to talk to them again.

AIs with general intelligence are even being used in video and virtual reality games. When gamers explore open worlds in these games, characters are given personality traits and motives that fit a video game’s story and those characters behave exactly like real humans would. These characters 100% believe that the video games that they’re part of are actually real life. However, the more intelligent and self-aware these beings become, the more ethical questions are raised when it comes to using these AIs in this way.

Programmable matter is matter that has the ability to change its physical properties including shape, density, color, and more. And this matter is able to change itself based on user input from mobile phone apps, hologram computer screens, and users’ thoughts.

Programmable matter is enabling the creation of multiple innovations including:

Programmable matter is also enabling the emergence of computronium, which is a type of matter comprised of intelligent, atom-sized nanobots. Computronium can take the shape of anything imaginable including rocks, metal, and polymer. And its main task is to perform computation that users can wirelessly control.

Further in the future, programmable matter could even result in the creation of an invisibility cloak. And we could gain the ability to construct an entire city in only a few minutes.

The most advanced humanoid robots are now indistinguishable from real people. And they’re mostly available to businesses, governments, and people in the upper class. Their physical appearance, body movements, facial expressions, and voices are so realistic, that they could easily walk around in a public place without anyone knowing they’re robots. One reason why they’re so realistic is because they’re built atom-by-atom using Nanotechnology ensuring microscopic precision. Exact copies of humans are also being created in high-tech laboratories for continuous testing and to ensure that everything about them is indistinguishable from the original person.

Owners of these robots and law enforcement have some degree of control over these robots using the electrical signals of their minds. This is a safeguard in case these robots try to perform an action that is potentially hazardous to the public.

Robot weddings have been widespread for a couple of decades now, but they’re becoming even more common since so many owners of these robots are forming much deeper emotional connections with these conscious robots.

Replicators are all-purpose, desktop machines that can reproduce a seemingly infinite variety of items. They’re similar to more advanced versions of 3D printers seen in earlier decades. Replicators have been used for military, corporate, and medical applications for a couple of decades. Even some vehicles are built using replicators now. But now, replicators are mainstream products available to the public.

They look like a hybrid of a washing machine and a microwave oven. Raw materials for them can be purchased separately, and loaded into these machines in solid, liquid, or powder form. An interior compartment is accessed with a small hatch, where objects are constructed atom-by-atom. The process takes a matter of minutes and the assembled items can be used immediately. Blueprints for various types of items can be accessed from the web and programmed into these machines. Many of these blueprints are for items that were originally created in the Metaverse and other virtual environments.

Over the next 150 years, it’s expected that replicators will create unprecedented levels of abundance and make work as we know it obsolete. Basic items such as food, energy, and clothing could become essentially free in most countries. Replicators could provide such an abundance of resources that they could eliminate famine, disease, and many historical justifications for war.

6. The First Generation Of Antimatter-Powered Spacecraft Is Emerging

The energy density of antimatter is roughly 10 billion times more powerful than other chemical reactions such as hydrogen and oxygen combustion.

This type of energy was previously too expensive to produce in large quantities, but advancements in AI and simulation techniques helped lower its cost tremendously. This happened in parallel with rapid advances in engine design, materials science, and fusion power. By the late 2060s, the first prototype antimatter-powered spacecraft was demonstrated.

Using this propulsion system, a trip to Mars would take one month instead of seven months using other methods.

A trip to Jupiter would take 4 months instead of 6 years.

And a trip to Saturn would take 5 months instead of 7 years.

Buildings in developed nations have become highly automated and self-sufficient. In addition to robots, a typical new home now includes the following:

8. Buildings Are Able To Assemble Themselves Using Nanotechnology

By 2070, it’s now possible to build entire homes and offices using nanotechnology alone. At the start of each construction project, self-assembling machinery is situated around a scaffold system that initially resembles a giant, four-level bunk bed. Successive layers of material at the atomic level are added to each vertical section of a building until it eventually tops out. These machines are like significantly bigger versions of 3D printers and replicator machines.

These intelligent machines are also capable of building appliances, doors, and other components while robots inspect the interior, perform safety checks, and make adjustments where necessary.

This process is so rapid, that it takes a matter of days from groundwork to final completion. Humans are rarely if ever needed on site.

For some of the more unique building designs and features, traditional methods of construction and engineering are still incorporated. Even these traditional methods will eventually be replaced by self-assembling machines as this technology advances further.

By the late 2070s, even skyscrapers and other tall structures can be erected using this method.

By the mid-21st century, severe climate change gripped much of the world. Desperate measures were taken by governments, businesses, and individuals to adapt to a rapidly worsening environment.

By the late 2060s, underground facilities, often referred to as "earth scrapers" have become a viable option. These can reach hundreds of meters below the Earth's surface and they utilize new materials and structural techniques. Self-sufficient power generation, production of food and water, fully automated recycling, and heat management are common in these underground facilities. Some facilities are powered by fusion, while others have access to geothermal energy if placed in the appropriate geographical location.

Movie theaters, gyms, spas, virtual reality, and other features ensure that occupants are kept stimulated and free of claustrophobia.

Most of these underground living areas provide the advantage of being essentially immune to nuclear weapons, as well as various other global threats.

As the number of residents in these underground living areas reach into the tens of millions, they will be joined by a network of hyperloop tunnels that connect countries and continents to each other. Many of the design principles in these facilities will later be employed on the Moon and Mars. In the far future, they will also be constructed for colonies in hollowed-out asteroids.