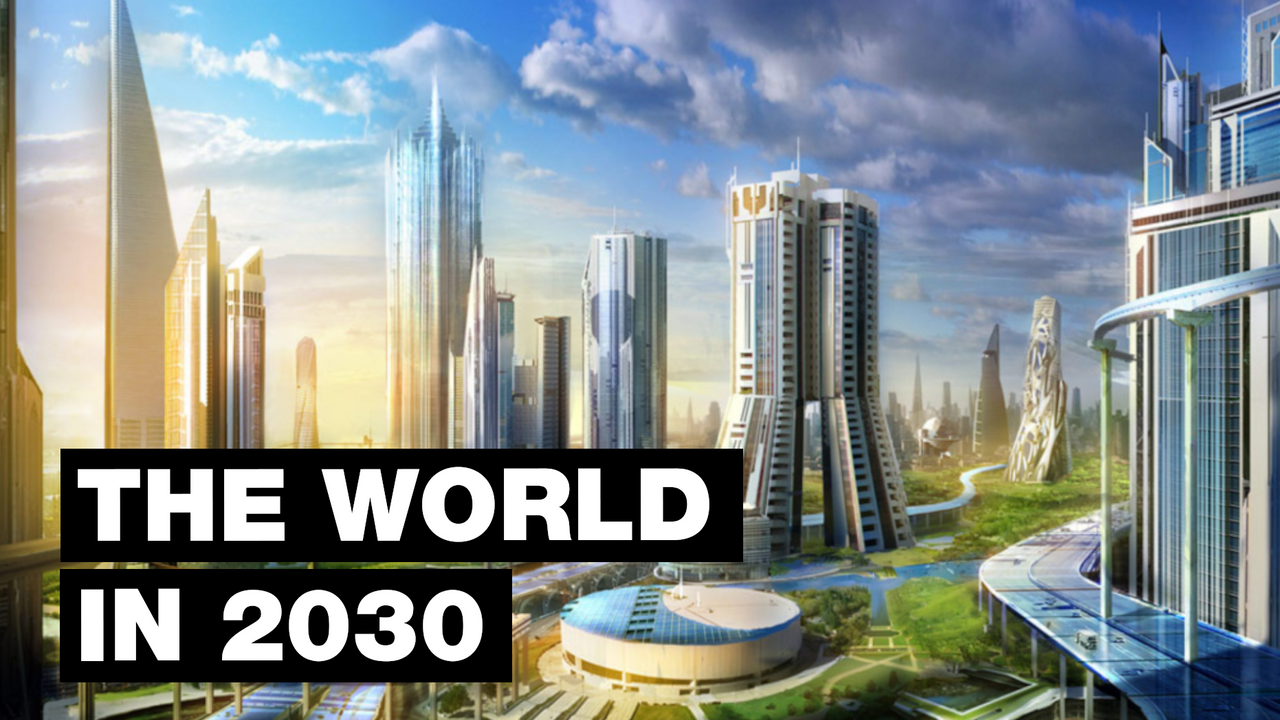 In 2030, the world will look dramatically different due to multiple technological advancements. For example:

By 2030, there will be exponential improvements of computer processing power, voice recognition, image recognition, deep learning and other software algorithms. Likewise, natural language processing technologies like GPT-3 are constantly being updated and surpassed.

It will likely reach the point where artificial intelligence can pass the Turing Test. This a test where a human engages in a conversation with a machine and probes it with numerous questions. And if that machine can convince that person that it’s a human, it passes the test.

This could quickly lead to AI-generated virtual assistants that have the capability to carry nuanced conversations with you. And later, this technology could carry over to characters in virtual worlds and video games.

By 2030, most VR screens will have 8k resolution, which has 4 times the number of pixels on 4k screens. When you view character models and objects up close with these devices, there will be zero visible pixilation resulting in breathtaking detail and realism.

Because of other equipment upgrades, VR games will have near zero latency and a wide field of view.

Additionally, some haptic suits will become electrode meshes to maximize comfort and convenience.

Apple is rumored to released its own 8k virtual reality headset in the mid-2020s.

By 2030, most VR headsets could include the option for a brain-computer interface to record users' electrical signals, enabling actions to be directed by merely thinking about them. Headbands and wrist bands with non-invasive sensors could become the preferred choices for mainstream brain-computer interface use. However, the immersive effects provided by brain-computer interfaces could be limited at this stage and only usable in specific situations. Nonetheless, they will provide increasingly more lifelike ways of interacting with virtual characters, objects, and environments in the metaverse.

4. The First Quantum Computers With 1 Million Qubits Will Emerge

By 2030, IBM and Google could each build quantum computers with 1 million qubits. This advancement will revolutionize how we solve optimization problems, train and run machine learning algorithms, and better understand the physical processes of nature down to the sub-atomic level.

It will revolutionize areas such as artificial intelligence, financial modeling, drug development, weather forecasting, and cyber-security.

And by as soon as 2035, fully-functional quantum computers could become available to the public both in the cloud and as physical units.

By 2030, 3d printing will be used to construct living, biological systems. Layer after layer of cells, could be dispensed from printer heads and placed exactly where they’re needed with microscopic precision.

Initially, they’ll construct simple components like blood vessels and tissues. Next, they will begin to print relatively simple organs. In the coming decades, they could eventually print the majority of the 78 organs in the human body.

By 2030, it could become possible to replicate small areas of the brain with artificial brain implants in order to repair damage from Alzheimer's, strokes, or injuries. This also includes the restoration of lost memories. That’s because these devices can mimic the electrochemical signals from regions like the hippocampus, which is involved in the consolidation of information from short-term to long-term memory.

The device would work by effectively replacing damaged parts of the brain, predicting what those parts of the brain should do from moment to moment, and then allowing the transmission of brain signals between areas where there was once a gap.

Through the 2030s and 2040s, artificial brain implants will become increasingly more effective at replicating complex functions in the brain.

By as early as 2024, SpaceX astronauts will launch into space and reach Mars by 2025. They will use the SpaceX Starship on the Super Heavy rocket to reach the planet.

Additionally, they’ll bring robots with them to perform activities like making basic materials and parts on Mars.

Additionally, after landing on Mars, the spacecraft would be loaded with Methane-based rocket fuel that they would create on Mars to return to Earth.

8. The First Version Of The Quantum Internet Could Emerge

A quantum internet would be one that uses quantum signals instead of radio waves to send information.

This type of internet would be primarily used to send data that can’t be hacked or intercepted using conventional methods.

In 2030, it may be possible to use a personal computer to transmit or access quantum-encrypted information through a cloud-based quantum computer.

The U.S. Department of Energy has already unveiled its blueprint for a national quantum internet, and we may see a prototype for it by 2030.

9. A Billion Human Genomes Will Be Sequenced

By as early as 2025, DNA testing will be so cheap, fast and routinely accessible that over a billion human genomes will be sequenced around the world. That’s about one-eighth of the world's population. The quantity of genomic data will reach the exabyte scale, larger than the video file content of the entire YouTube website. This massive amount of data will make it easier than ever before to use artificial intelligence to identify multiple disorders linked to specific genes including cognitive disorders. Since 75% of a person's IQ is attributed to genetic differences, the identification and exploitation of these genes could play a huge role in creating super-intelligent humans in the coming decades.

By as early as 2025, the exponential growth of data and information technology could make it possible to form accurate models of every part of the human brain and its 100 billion neurons.

Although, it could be possible to scan and map a complete human brain down to the neuron level, analyzing the enormous volumes of data it contains and using that to fully understand its workings will take much longer. Nonetheless, this major milestone will lead to innovative approaches to resolve most types of brain-related ailments. It could even help us in areas such as non-biological brain augmentation, using brain computer interfaces to control virtual objects, and the transferring of memories from humans to machines and machines to humans.

11. Terabyte Internet Speeds Could Be Commonplace

By 2030, 6G could replace 5G. Some experts estimate that it could be 100 times faster than 5G, which equates to 1 TB per second. At that speed, you could download 142 hours of Netflix movies in one second.

6G would also make it possible for cyberspace to support human thought and action in real-time through virtual reality and brain-computer interface devices mounted on the human body. This would result in virtual reality experiences that feel and look just like real life.

12. "Smart Grid" Technology Will Become Widespread In The Developed World

By 2030, integrated smart grids will become widespread in developed nations.

In the coming decades, smart grids will expand to even larger scales. Entire regions and countries will begin merging their grids together.

By the mid-2020s, printed electronics could explode into the mainstream creating a new generation of ultra-thin electronics.

By 2030, they will have such low fabrication costs that they’ll be commonplace in countless everyday business and consumer applications. Many previously bulky or heavy devices could be folded, stored or carried as easily as sheets of paper. This includes flexible TV displays that could be rolled or hung like posters. Foldable smartphones and foldable e-books could also become widespread.

14. Open-Source, 3D Printed Clothes Will Be At Near-Zero Cost

3D printing will become a mainstream consumer technology and produce items of clothing for just a few cents. By as early as 2024, 3d printing will be over 30 times faster than it was in 2014. Millions of open-source designs will be available to download. Sweatshops in developing countries could decline as a result, with low-paid factory jobs being made obsolete.

By 2026, 50 terabyte consumer-level hard drives will be on sale. And by 2030, consumer PC users will have access to 100 terabyte hard drives. This will become possible due to an innovative technique known as heat assisted magnetic recording (HAMR), which will allow data to be written to much smaller spaces. Additionally, hard drives will begin using multiple actuators at a time, which will multiply reading and writing speeds of storage data.

These hard drives will help us store 8k and 16k resolution videos.

16. Hypersonic Missiles Will Be Commonly Used In Most Major Militaries

When launched, cruise missiles typically reach 500-600 mph. However, hypersonic missiles are capable of exceeding Mach 5, which is 7 times faster than normal missiles and 5 times the speed of sound.

And, since they’re so fast, they’re difficult if not impossible to deflect with conventional defensive systems.

In fact, in 2021, China successfully tested a nuclear-capable hypersonic missile so this technology is already well underway.

17. Carbon Sequestration Will Be Commonly Used In Many Nations

Following years of research and development, various new approaches will be utilized for trapping and removing carbon dioxide from the air.

One method of carbon sequestration is the deployment of "artificial trees.” These artificial trees can capture carbon dioxide through a filtering system thousands of times more efficiently than real trees. They come in various shapes and can be placed throughout large cities, on the side of freeways, and other polluted areas where they can have the most positive impact.

Small modular reactors (SMRs) are a new class of smaller, cheaper, safer and more adaptable nuclear power plants. Since they can be built at a much lower cost than traditional reactors, they’re especially attractive to developing nations, which lack the ability to spend tens of billions of dollars on infrastructure. They’re also attractive to remote communities without long distance transmission lines, and for areas with limited water or space.

Small modular reactors would also allow increments of capacity to be gradually added as power needs increase over time.

By 2035, the small modular nuclear industry could generate several tens of gigawatts in energy valued at nearly half a trillion dollars worldwide.

19. Several Extinct Species Could Be Resurrected

By 2030, several extinct species could be restored such as the woolly mammoth, the dodo bird, and the saber tooth tiger.

There are three different approaches to restore extinct animals and plants:

Decades from now, the restoration of extinct species could become a vital part of restoring the Earth's biosphere. For various purposes, we could even see the restoration of Neanderthals and various dinosaur species in the coming decades.

20. The Entire Ocean Floor Will Be Mapped

As of today, less than 10% of the global ocean floor has been mapped in detail. Even the surfaces of the Moon, Mars and other planets are better understood.

Organizations in France and Japan are working on a collaborative project called Seabed 2030, that will produce a definitive map of the world ocean floor by 2030.

As part of the effort, fleets of automated vessels capable of trans-oceanic journeys would cover millions of square miles, carrying with them an assortment of sensors and other technologies. These ships would deploy tethered robots to inspect points of interest all the way down to the floor of the ocean, thousands of feet below the surface.

By 2030, the project will be largely complete. The maps would reveal the physical structure of the ocean floor with unprecedented detail in addition to showing the location of shipwrecks, crashed planes, archaeological artifacts, and other areas of interest.

Commercial applications include undersea mining and the inspection of pipelines.  It will also allow the surveying of ocean floor conditions for telecommunications cables, offshore wind farms, and future transportation methods.